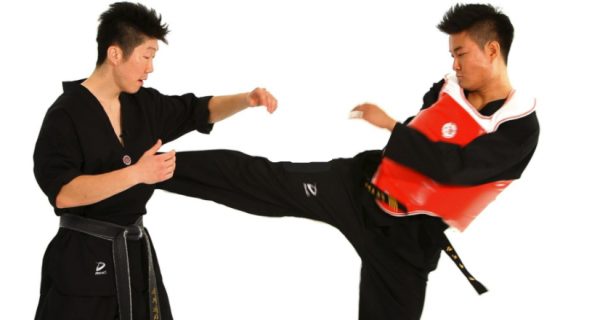 I’m going to be showing you guys how to use a sidestep. I’ll call this sidestep number one in sparring.

Now I like to use the sidestep. Sidestep number one I’m going to first demonstrate. It looks like this, without the kick this way. One more time. My right leg is going to go to the right side. This way. Now my opponent’s going to throw his kick. I sidestep one. And counter attack. Show this way. Again, I’m here. He goes to kick. Sidestep. This way.

Now a few tips. Tip number one. While you’re stepping make sure you have your down block ready, just in case. So I sidestep, one, and have my down block here. So if my opponent goes. Ready. Boom. Just in case. Just in case. Maybe he’ll hit, maybe he’ll not. Tip number two. Make sure you sidestep diagonally also. So not too side, diagonal, maybe going in a little more. So again, let’s show a little slower. My opponent attacks. I go in and then bang, go for the counter-attack. One more time, a little faster speed. And that’s how we do sidestep number one in sparring.