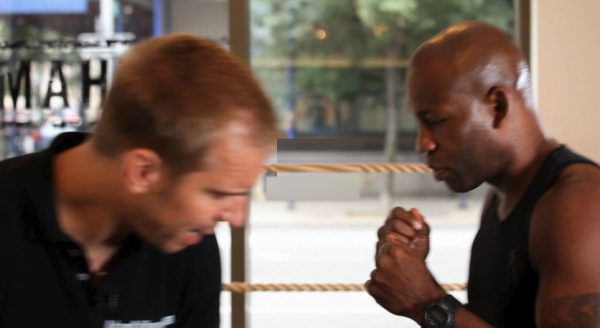 Now Terry’s going to show you some forward shuffling. Forward shuffling happens by pushing off the loaded foot, and he’s either going forward or back.

So stand front and center one more time, Terry. He loads the back foot, pushes off, moves forward, and moves back. If he puts that in action to advance to his opponent, let’s say he hurts his opponent and he needs to get on him quick, well, Terry can load off his back foot and shuffle to his opponent quickly and precisely and move him back.

Now there’s also side shuffles. There is also lateral side shuffling which is when Terry’s square to evade certain situations. So Terry, as he side shuffles, Terry’s going to go to the left side of the rope and to the right, and shuffle back and forth. This is a good way to practice in a linear motion.

The last technique for basic footwork is the rhythm shuffle. I call it scatting. It’s a baser rhythm where you’re moving back and forth creating your boxing dance.

Terry’s going to show us. He’s got his dance there, and this is his rhythm factor.

If you don’t have rhythm it’s going to be very hard to box. But, you can get it. You can get it by jumping rope and working your scat.

Your scat works like this. He’s scatting, I come at Terry, he shuffles out one way, he shuffles this way. If he wants to spin and hit me, at will, he can at any time. That’s Terry Sutherland footwork for you right there. That’s the footwork in boxing at it’s best.

So, with regard to footwork practice it. Turn your tunes up and get some rhythm in your step. Box stepping, practice it day in day out if you want to be a proficient boxer.