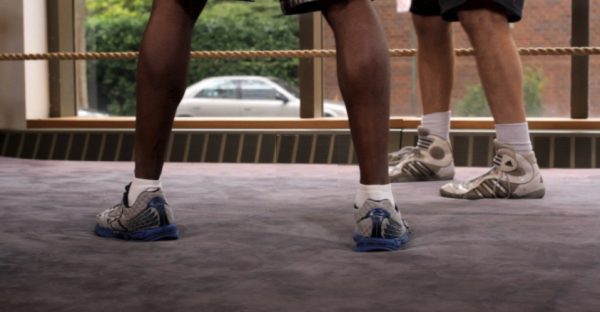 Pivoting is essential, especially, when you’re trying to follow your opponent. Terry’s going to assume a stance, all right. Terry’s going to pivot in circles for
us, quarter turns. He can do a complete circle or he can go left to right. Perfect. And pivot left. Nice work.

All right Terry, practice your walk. Look how difficult that is. All right, Terry’s going to evade me by walking giving me his shoulder. So when I
walk to Terry, Terry has enough space. There’s no need to panic. Terry’s just going to walk. Therefore, if I try to get up on Terry and he wants to
avoid me, he can turn his walk into a little jog. You’ve seen Bernard Hopkins do this on several occasions.

The speed walk is a combination. It’s athletic footwork. You open up the feet, bounce, and then you walk off. Terry’s going to show us how it’s
done. So, his speed step; he opens up his feet and walks off. The speed step is work, step by step, by exploding off your feet, loading the back
foot, and moving off that foot into your walk.

That’s the speed step. It’s a very useful step when you need to move to A to B quickly and you have enough space to do so. The speed step works
fantastic. Pivoting, walking off, and speed step is essentials with regard to intermediate footwork for boxing.