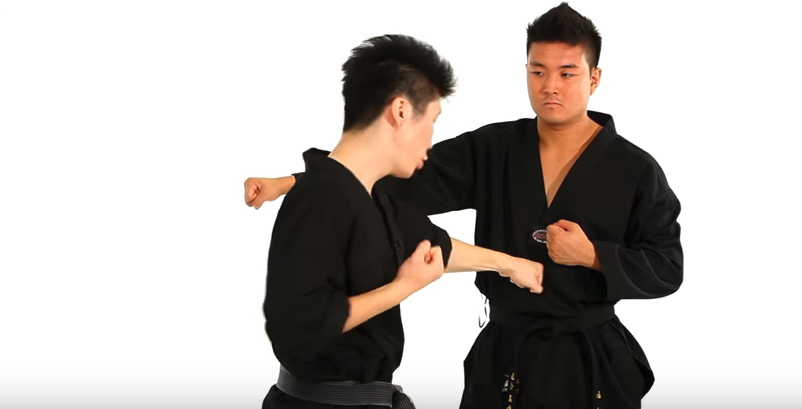 I’m going to be showing you guys how to do an outside block in Taekwondo self-defense. My opponent and I are in a fighting stance. Sometimes your opponent or enemy can throw a really wild right hand or his backhand. Like this. One way you can block is using the outside block. When he comes in, I like to take a step and block this way. One more time. One, bang, this way. Now I can go for the attack. I can attack his body, his face or I can attack twice, one, two and throw a kick, combination.

Let me explain a little bit about the block. The first thing is, use your footwork. This is very important. If he throws a wild right punch and I just stay still and throw a block, like this. He throws a punch, boom. Because he’s coming in, he has a little more force, a little more momentum, he’s going to sometime punch through the block sometimes. Also, you never want to block on the wrist. A lot of the time you see someone punching and you block like that. We don’t want to do something like this. I like to go in, or again, go to a side step. I think we went over this before. One, sidestep and block here. I like to close my distance and cut off his power a little bit. One more time, one, bang. Now, attack his solar plexus, one, attack his chin, roundhouse kick, inside thigh, outside thigh, bang, or bang. It is your choice. One more time.
And that how we do Taekwondo self-defense outside block.