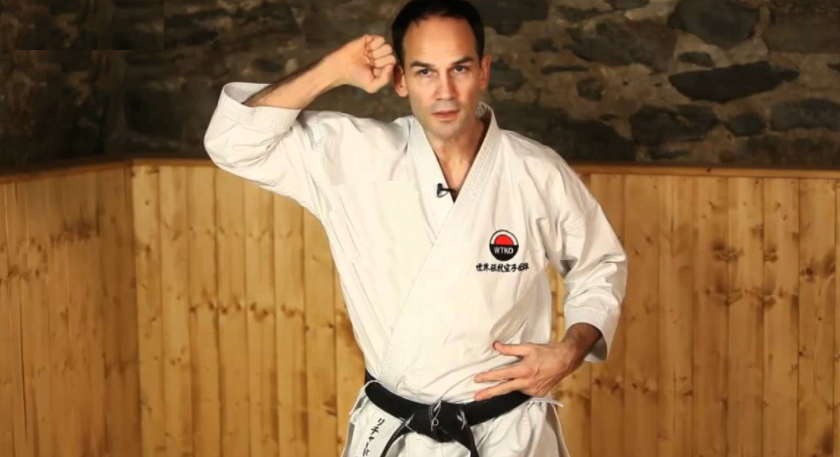 The middle block of Shotokan Karate that we’re going to discuss now is outside block or Soto Uke. Soto Uke comes from the outside and blocks across. And when we prepare, we also have to remember we’re really blocking with our body like all our techniques. If the body’s not really involved, then the arm is allowed to take over. This is Soto Uke.

Under pressure and in perhaps a dangerous situation or when you’re extremely fatigued from hard training, the technique is going to break down and degenerate. If we keep coming back to our core and let the arms be much more subordinate, then we don’t lose our technique and we can train longer and we can also train under pressure or we can react under pressure much better from the lower body.

So at the beginning of the technique, we want to start with our hip rotating. And many techniques we want to control this centrifugal force, but in Soto Uke, we want to use that to allow the elbow to come out and prep the blocking position. Some people bring the arm wide. I disagree because it makes the arm heavier and then you’re going to start focusing on the arm or the arm will be difficult to control the body. The lighter the arm is, the more it can be controlled by the body, the quicker it’s going to be, and it’s just a question of keeping the connection to the body to make it strong rather than having an independent strong arm separate from the body.

So as you begin, rolling up is better than lifting up and out. Roll it up. Your fist can almost touch your ear. If you your elbows not tense, then this will be natural and very, very bent. Your elbow is a little bit tense. The tenser it is further out it’s going to go and, obviously we want to avoid that. So taking the sort of extreme sense of training your basic, it’s going to be very bent. Come back. Cut the hip back. Remember what’s more important than trapping the arm is bringing the hip around. From there, you can bring the hip around and do a myriad of different things. In this case, we bring the hip around to do Soto Uke, the middle block of Shotokan karate.