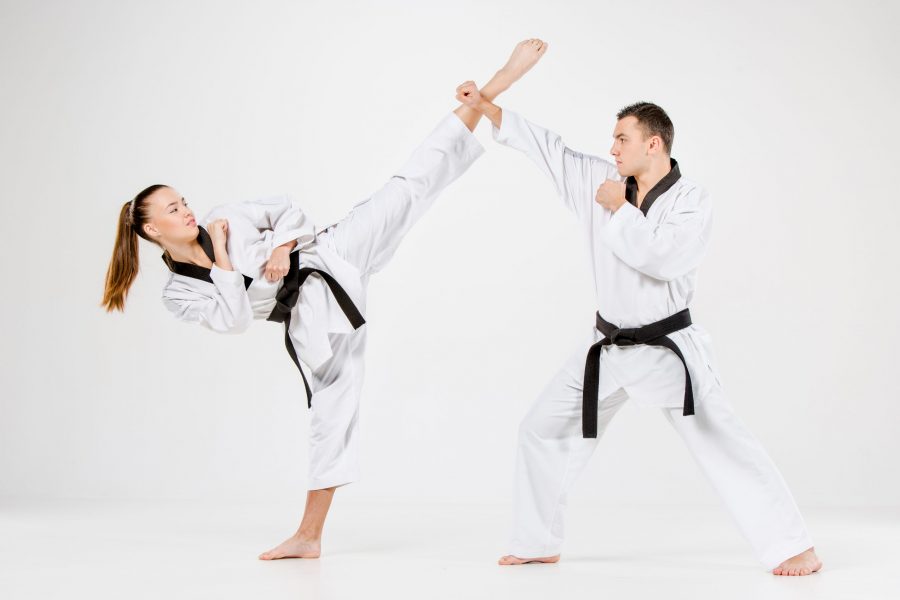 The Dollyo Chagi or roundhouse kick is one of the most famous kicks in Taekwondo is also one of the requirements in White Belt 8th Gup rank. This kick has several names, also called round kick, swinging kick, and turning kick.

Very important and highly used in sparring known for its extreme speed, force, and power. Keep in mind you need to control it because this kick generates a lot of power, you can get disqualified by excessive force so watch out.

Targets in the Roundhouse Kick

The Dollyo Chagi most common targets are:

But you can also aim to the knee, the floating ribs, kidneys, and groin if the attacker is sideways.

There are many possible combinations you can do, here we can mention:

The taekwondo roundhouse kick, known as the Dollyŏ Chagi, is performed first by stretching the knee upward in a “chamber” position. This chamber, identical to the chamber of many taekwondo kicks (front kick, sidekick, etc.) is used so that the opponent cannot guess which kick he will throw. The knee is then rotated so that it is almost parallel to the ground and the kicking hip is simultaneously rotated towards the opponent. The rotation of the hip, combined with the snapping of the leg forward, adds power to the kick. The impact surface is the instep or the ball of the foot.

The roundhouse kick can also be thrown from the rear leg towards the target and hit with the lower shin or instep. This method consists of giving a quick blow to the opponent before he sees it coming. The kick swings and then breaks in front of the practitioner to give it more power and speed.

Is a roundhouse kick effective?
A properly executed roundhouse kick can be devastating if executed properly besides it is not recommended to block it because you will absorb the traveling power. But if you add the hip and align to your target in time then you might KO your opponent.
What muscles are used in a roundhouse kick?
You use everything from your lower back, hips, and leg muscles. Hamstrings for the extension, gluteus medius, and gluteus minimus for the abduction. When pivoting you use your femoris, iliopsoas, tensor fascia latae.

How to block a Dollyo Chagi ?

There are several ways to block a Roundhouse Kick, these are just a few to mention:

***Important, if you are sparring make sure you move around your opponent change your fighting stance, this will make you unpredictable. Remember a target that moves is harder to hit.***

How can I improve my stretching? I want to kick higher.

Kicking higher is possible but you will not only need to stretch your legs but your entire body. Because when you kick your entire body has to adjust to a new posture to allow one leg to reach the target while the other holds your entire weight.

To kick higher you must stretch your lower back, hips, torso, and legs. Here is a great full-body stretching session that can help you kick higher.