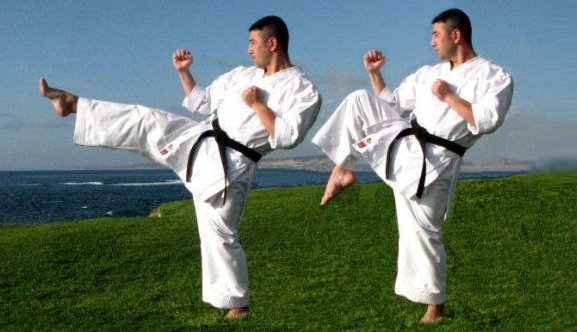 In this article, we will analyze the frontal kick of Karate, we will study the proper execution, the way to exercise it, how to effectively apply it in self-defense techniques and sparring or Kumite. We will also talk about how to improve your kicking technique to advance your training in martial arts.

The front kick is one of those kicks that is found in many martial arts under different names, sharing mostly the same details. There are different combinations of foot maneuvers that provide different results. It is considered a basic kick but can present several variations by making small modifications or adding other moves.

The common targets for this kick are the knees, groin, stomach, neck, and face.

A front kick can also be used to block or stop a technique. An example would be when the opponent is preparing to kick with a Roundhouse, then you can stop the move by using a front kick to the inside of the kicking leg or to the middle section.

If the attacker is coming to you with a punch you can use a front kick to kick the arm, on the tricep, or on the forearm. This would be mostly an option for a street self-defense technique.

If the attacker has a knife, then kicking the hand or arm holding that weapon with a front kick can be an effective move to get a few minutes to run or to apply a follow-up technique against the attacker.

These are some of the essential Front Kick you must also know, here they are:

Some instructors could name more Front Kicks based on other principles and situations, but these are the more realistic ones you will see and which you can use. All these kicks have different features and usage.

Adding Power to your Front Kick

A Karate Front Kick can be executed with the front or back leg, the front leg will be faster and the back leg slower but more powerful. The target height is very important because you need to consider several factors to do the perfect kick, if you try to kick too high and you are not flexible enough you will lose your balance and your back supporting leg will make you fall.

The key to adding power to your Front Kick is using the hip and lower back pushing forward. Here is a formula:

Step 1: You should be in a sparring position or on a basic stance.

Step 2: Here is where your hands are up and your knee is up aiming at the target. This step is very important because the knee leads the way before you make contact with your target.

Step 3: You keep your hands up while you deliver the kick to where you were aiming with your knee as shown in the picture.

If you need more deep stretching routines then these two articles are recommended for you:

In the following leg stretching exercise we are working on our hamstrings and quads at the same time. These are essential when bringing the knee up and aiming the target before kicking. Make sure you execute this exercise on both legs.

The following exercise will target the hamstrings and calves. This is essential to help you reach your target when kicking. Make sure you execute this exercise on both legs.