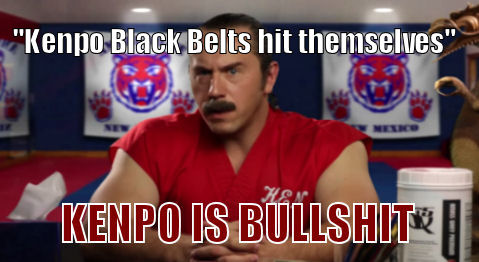 Kenpo Black Belts… hit themselves on Self Defense Techniques? Well, not long time ago I received a message with some questions about Kenpo Karate. One of those was: Why in Kenpo you have to hit yourself on the self-defense? And I did not know what to say at first but, he was is right…I have seen some self-defense where it looks like the one doing them is hitting himself….was it for speed?? for accuracy? for leverage??? for better timing?? Can anyone tell us the insights of it?

Even Master Ken says “Kenpo practitioners hit themselves…” making sarcastic humor about it. “Students are encouraged to hit themselves during the fight, which means you fight a Kenpo Black Belt long enough he will kick his own ass” Master Ken.

We all know that Master Ken words might be hurtful to some and will make laugh others. But we need to consider that if this video exists and talks about that issue that can be seen in Kenpo Karate then we have to think if this is something that has been happening for a long time that is the result of a certain Kenpo Lineage. Most of the Kenpoists have shared Kenpo with many and we have experienced the differences we all have, but there are some who tend to “hit themselves” and some who don’t, so my theory is that there is a Kenpo lineage that brought it to the Kenpo Gatherings and it was indirectly implemented by many unconsciously.