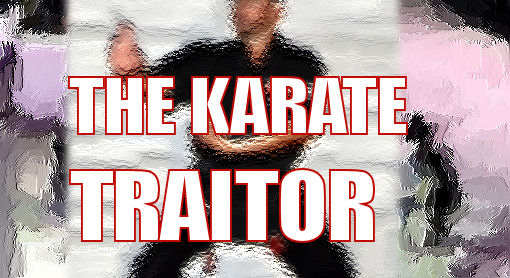 I was a Karate Kid once. This might sound controversial at some point. I remember when I joined a Martial Art school that taught karate, everything was new to me and I kept learning and learning. My team mates and I were training at the beach or park on weekends. We trained hard, we went to many tournaments too and one day one of them gave us a crazy idea.

We were young, orange and purple belts. Our friends crazy idea was to visit other martial art studios in our city taking the advantage that many were offering a Free trial class, some Free trial week. So we went to many, just to see what they had to offer, trying to test what we knew, trying to learn a few other techniques.

We kept doing this for a while until our sensei found out what we were doing, it was the 90’s and things were different, there was no facebook, no twitter, no youtube…but somehow a friend of a friend told a friend instructor that knew our sensei and he found out.

Our sensei was so mad about it, he called it treason! We were not supposed to do such a thing of seeing what we could learn at other Martial Art studios, from that moment he treated us differently, he was punishing us in class. Some of my friends left the dojo, a few end up training somewhere else. I decided to stay to see, some of my friends were still there and without your friends around who share the same passion, Karate would be empty for me. Everyone needs a friends motivation too, compete with your friends.

Years later, because of work, I end up in different cities and other countries. I really love martial arts and I have a need to train if I don’t train I feel strange, that I need something. So every place I visit or had to settle down for a few months I was visiting local Martial Art studios, because of this I discovered Capoeira, Muay Thai and some other styles that I also tried.

I never stopped training martial arts, when I was a kid I thought I would never reach the black belt level and after 12 years of hard training I earned it, many get their black belt and that’s it for them. Once I got it, I felt like I still needed more, it was addictive.

When I moved to California I joined a few martial art schools to learn more and find the one that had what I was looking for, a place that is friendly, great instructor, good team to train… It was not easy, some instructors were rude, one of them told me “sorry I don’t teach black belts”, another one told me “come and teach for me and train whenever you want for free”. I wasn’t looking for teaching, but training like the good old times.

I like teaching too, I’m a high school teacher. But if I teach, teach and teach I will get not train at all, because I won’t be that active. I was looking for a place where I could do both, help teaching and train hard.

This made me visit several studios, on a few of them I stayed a few months in others just a couple of weeks.You might wonder why… well if the instructor does the same thing every single class, or if his students are left by themselves unattended then bad things can happen, or when the instructor out of the sudden leaves you in charge until the end of the class and then he does it again and again without asking or talking to you. Those are things that are big red flags, no professionalism.

Today I still train, teach and share my love for martial arts.