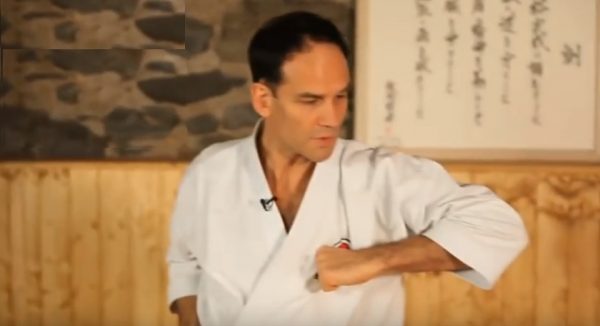 With elbow strikes, we’ll show a few today. One of the things we should consider, which is true of all techniques, is that we’re really hitting with the body.

While, as I said, it’s really true with all techniques, we do extend much further and of course, the elbow is going to be a little closer to the body. And we should really remember that and reach with the body and not reach with the elbow because that technique should then segue into something else rather than remain as an elbow.

The other thing to consider is the angle of your wrist. When we make our pull backhands, as I mentioned in an earlier clip, we twist the palm up to close the armpit. Consequently, when we’re doing an elbow behind, we’re going to do the same thing to really more than anything else attach it so we hit with the body, not reaching back with our elbow. When we go up, the palm is going to go to the side, because that will also change the shape of your bicep. When your armpit is open, in other words here it’s closed, so twisting this way we want that strength here. When it’s open, we can’t have the strength here, so it has to go the next part of the body out, and that’s going to be the bicep. You want it broad and supportive rather than short and bunched up. Which doesn’t matter when you’re here because you have the next muscle in which is more important, which is the armpit.

So practicing this, really give yourself a freedom of movement with your body. You’re going to strike up and strike back, every time twisting the body around. And here you’re going to turn your wrist and then to the side, striking up, back, around, to the side. Up, back, around. When we go to the side, try not to bring it up and go down because you’ll come down onto a target which is probably better to come under, either under the chin or under the ribs. So coming low is better for the target. Also, from here, or from wherever you are, coming low just covers this a little bit. Coming from high, you’re prepping and opening and leaving yourself vulnerable. Come low from this when you come to the side. Up palm is to the ear, behind palm is up, around palm is down, close this armpit, which might be open, to the side palm is down. Up, back, around, side. Up, back, around, side. These are some of the basic elbow strikes that we have in Shotokan karate.