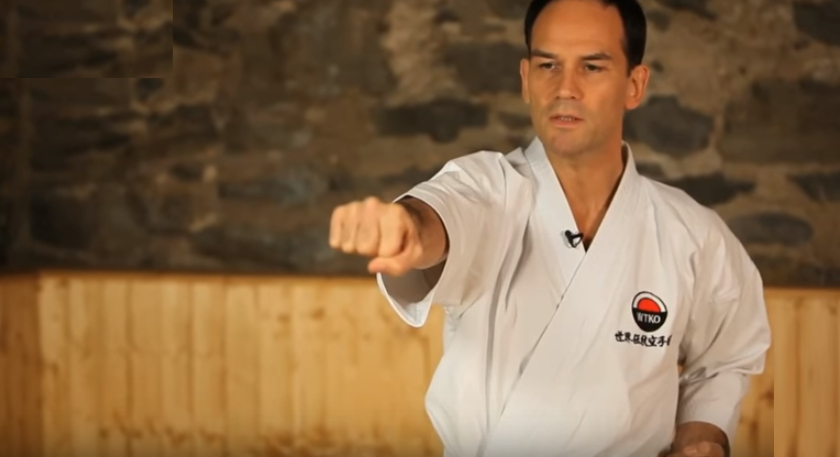 I’m going to show you the basic punch of karate which is called choku-zuki, which literally means direct punch, and it’s a very simple punch which you might not actually use as is because I’m not going to move my body very much. I’m not going to shift my stance and I’m not going to twist my hips. So you’re not generating the power that you want if you’re really going to hit something. But, this punch is designed to simply practice releasing tension and maintaining connection and finishing the technique without injuring your elbow. If you don’t twist at the end, you might hyper-extend your elbow a little bit. So that’s why you’re going to twist your punch at the end. Twisting it on the way back not only releases that locked elbow which, being locked, is never a good thing. It also reconnects your arm back to your body.


Ultimately you’re going to hit with your body in almost every technique we do, even though you might make contact with different parts of your hand or your legs or feet. You will be hitting really by extension from your body. So the arm comes back by, unlocking. The other one comes forward in sync. Both armpits are closed so there’s also a potential to hit at the mid-way point or any other point along the course of the punch. And waiting until the last minute to twist. If we twist early there’s a tendency to open this elbow out. And what we don’t want to do is flap the arm because in reality our distance might be changing all the time. Here, we don’t want the opponent to come close so we’re not hitting with the full force of the upper arm behind the punch.

And choku-zuki, zuki is actually skeet in Japanese which just means thrust, so there’s a thrusting motion. When you thrust, you have the upper limb behind the technique. This is the technique. To make more power you’re going to have to send it a little bit with your hip, otherwise you tend to borrow from the shoulders and however many years you’ve been training you’ll probably end up doing this. And this is one of the frustrating things but also the beauty of practicing an art. The simpler it is the more difficult it is and the more you need to refine it. So constantly working on this line even when you’re speeding up is how you’re going to develop your punch over a long period of time.

Your focus on the end is just everything coming together and, you know, this is a focal point. As you get more advanced you can focus a little bit earlier and this involves the body much more. So to go back to the basic punch it’s very extreme. It’s all the way in, not necessarily up, but don’t stop without completely compressing this into your body and collapsing it into your body. The other arm is the opposite, so it’s very black and white when you have a technique as simple as this. This is the choku-zuki, the straight punch, of karate. Ka!