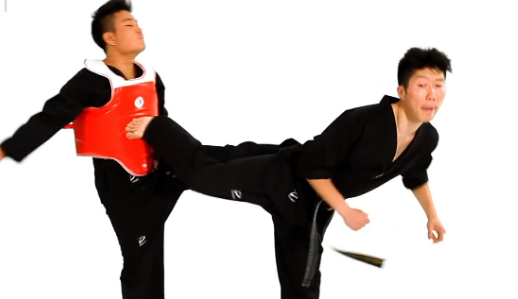 So my opponent and I, we’re in a fighting stance. Again, a basic drill would be like this. My opponent throws a hop step roundhouse kick, and I time and try to attack the body with a jump back kick. So one more time.

Now you have to read your opponent carefully, because, again, my opponent might not use the left leg, he might use his right leg. So I might have to switch and let’s say if this happens here, I check, he throws the right leg, then I could throw that back right there.

Now, what would happen if I throw a right leg back kick when he throws a right leg roundhouse kick? See if I make a bad judgment, what happens is he throws a roundhouse kick, I throw a jump back kick, boom, we might get caught. So again, while we’re sparring you can see your opponent, what leg he likes to use, then you make your strategies from there. So one more time. We’re in an open stance, from here we throw the kick, and I throw the jump back kick.

Now one thing that you have to do is try to bait your opponent. So I like to bait my opponent, again, using some footwork I use to step forward right here. And throw the jump back kick there. OK? So if we’re in another open stance, we’re here, maybe I like to use a slide forward technique if he likes to use the left leg. So I’m balanced, I slide in. Do it that way.