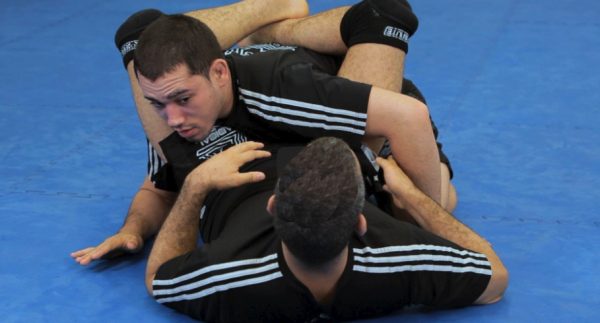 My arm comes in and he’s defending the oiler by straightening his arm. Immediately I bring it to my neck. There’s a little pinch there. Grab my trap, grab my elbow, squeeze my knees. Just like a triangle I am going to use my legs right here, not a lot of arms. Legs and core, and again keeping this open. Push down a little, squeeze, crunch. OK? If he doesn’t tap, it means you are too close. Push him away, make sure his wrist is by your neck. If your doing it and he doesn’t tap, push him away, squeeze your legs, go. One more time. I’m in the pre-triangle, one. There we go. That’s internal arm lock from the pre-triangle position.