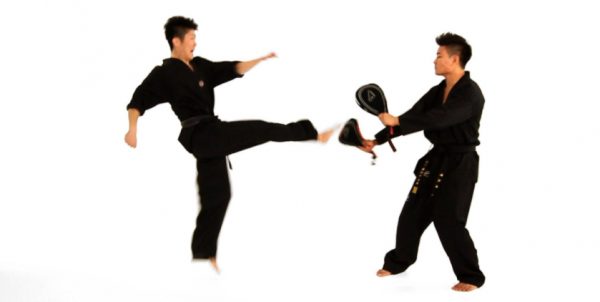 Now a double roundhouse kick is when you throw two roundhouse kicks and one air, you can say. So from here, slowly, step by step, kick, hold it up there, and give it a jump kick again. And land forward. One more time. One, two, and land. Now make sure, when you do your double kick, you kick with that first kick. OK, the first rear leg kick, and jump. Roundhouse kick.

I’d like to demonstrate with my partner. He’s going to be holding the double roundhouse kick. I’d like to practice right now, stomach level. I’m going to first demonstrate fast motion. One more time.

Now another thing, very important, is that you keep it snappy and don’t turn your hip too much. I see people make a mistake. They turn too much. What happens is, because you’re turning your hip way too much, it’s harder to recover for that second kick.

So what I like to do is just maybe turn your hip slightly. OK? One more time. Just slightly. Keep that upper body well balanced. One more time. Make sure you keep it snappy. I don’t want to see straight leg. Again, another mistake I see with the students. They kick like that. Do not do that. Again, I want to see the snap. One more time. And that’s how we do the double roundhouse kick.