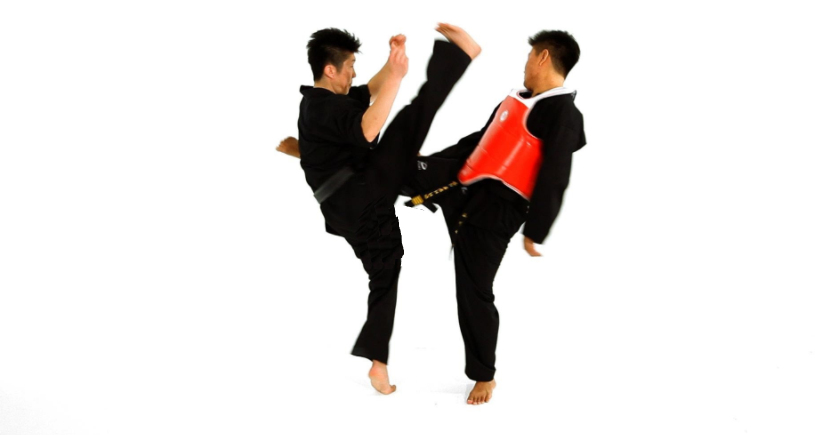 One more time, let’s go over the one, two, and three. We’re going to be over here. I wait. He attacks, I slide, using my rear leg, using my hop step back at him. The last one, slide and throw that kick, tornado roundhouse kick.

Now we’re on the open stance and my opponent throws the, again, hop step roundhouse kick. Now one of the counters I like to do is throw an axe kick towards my opponent’s face. Make sure when you’re practicing with your partner, be careful. Try to have no contact. So again, when he throws a kick, I might do a little down block first and throw my axe kick. So one more time. He throws the kick, and counter-attack this way.

Now if my opponent throws the other leg and I try to throw an axe kick with this, what happens is our legs get caught. OK? So again, he throws a kick. I throw the axe kick, boom, and that’s what happens. That’s one of the errors. Make sure you know which technique and which attack and which leg he’s coming after you with.

So again, this is for the open stance right now. Give it a switch. He gives it a hop step. Towards the face. And those are some basic counter attacks to a hop step roundhouse kick.