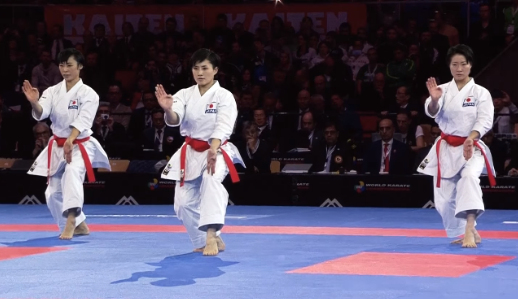 Kururunfa is the 17th karate kata of the Gōjū-ryū style and the seventh and penultimate of the higher kata ( Kaishuu kata). The most appropriate translation seems to be “to oppose the waves”. The Chinese name for this kata is Kun lun fa , which indicates the method of lun Kun taught at the Buddhist temple of the Kunlun mountains . In this kata appears a guard called yame gamae , “guard of the mountain”. Jinan Shinzato one of the best students of Sensei Chojun Miyagihe called it one of the best kata. It is usually performed for the 5th dan black belt exam along with the kata Suparinpei.

Like the Sesan , Kururunfa has soft movements followed by other fast and powerful ones and employs a great deal of movements in Neko ashi dachi. However in Kururunfa the difference between “hard” and “soft” is very marked because of the slow and concentrated techniques that are followed by a brief pause and a series of explosive and devastating blows in order to destroy the opponent.

A reference from Wikipedia has been used in this page.