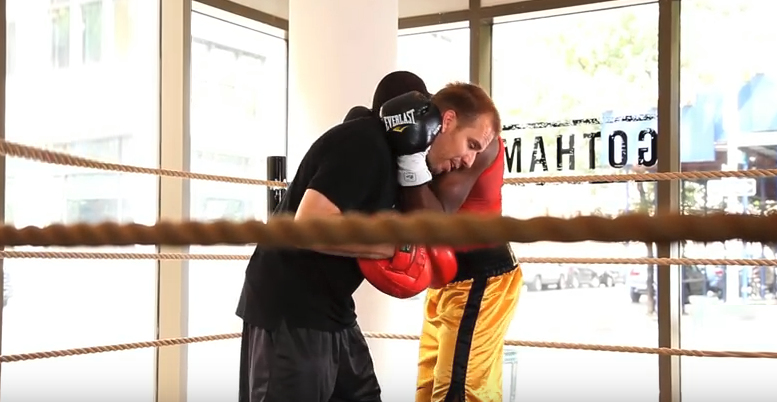 Defensive techniques for advanced boxing is what we’re going to work on now. Why I don’t like showing just a defensive technique without a counter is because you make a groove. If you learn how to defend and you don’t learn how to counter, right off the bat, it ingrains the wrong muscle memory. We’re going to do something, and this is a tribute to Floyd Mayweather because we love you. All right. You’re a great fighter.

We’re going to show them the shoulder roll. He’s going to touch here with the shoulder, rip and uppercut, snap back the chin, and then come with three. Touch, again. Again. Let’s show them how that looks now, jab. Integrating all my shots, one, two. Count, three. Jab, jab. We’re going to work an evasive technique where I’m pushing up on Delen, Delen is going to take me, spin me out, work a right hand and a left hook. He’s in the clinch here. He’s going to take my neck, grab the back of my neck, spin me around, pivot, right hand, left hook. Again.

We’re in a clinch. This is a defensive move. He’s going to spin my neck around, and the body follows the head. So, we’re clenched up right here. He’s going to take me, spin me, pivot, and come back. One, two, jab, jab. The shoulder bump, execution, boom, ba, ba, ba, jab, jab.