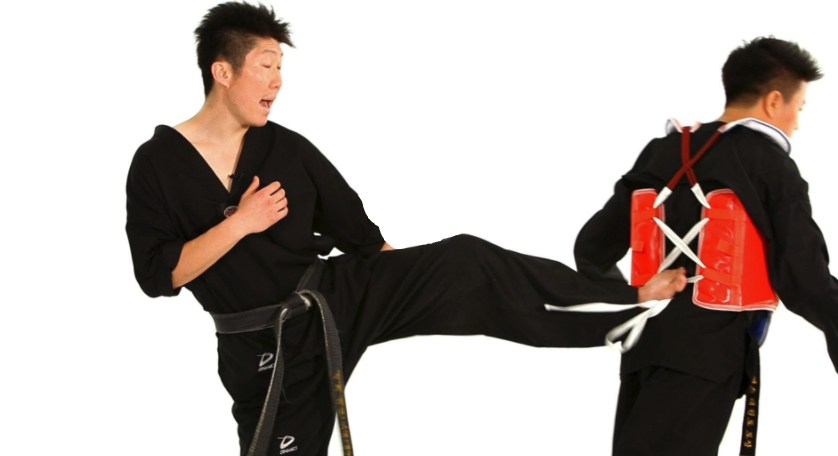 I’m going to be showing you guys a defensive technique using a cut kick against jump back kick. So first, what is a cut kick?

So my opponent is here. We’re going to demonstrate. A cut kick is almost like a push kick but at a 45-degree angle. And again, a cut kick is not a strong kick, but it’s a kick to make the distance.

And like that. Just cut him off. One more time.

This way. Now my opponent is over here.

Cut kick is actually very good for taller opponents. Let’s say I’m sparring, and I check, and I start reading my opponent, and he’s about to do a back kick, or something tells me that he might do a jump back kick when I come in. So I might go, “Ha!” He might show me a shoulder assault, boom. I’m reading him. He might do a back kick.

Now, just in case he might throw it, I’m going to use a cut kick. So now when I do a cut kick, he’s going to turn, because he thought I was going to do a hot step roundhouse kick, and he’s going to lose his balance, and you can go forward and initiate the attack.

But the thing is, going against a taller opponent and using this kick, even if I throw a cut kick, he might still get me because he has such long legs. So again, I’m going to show, I’m going to go in, and boom. He still might go through.

Let’s show it again. I throw the cut kick. Bang. And I still get hit. So again, maybe when I’m going against a taller opponent, I wouldn’t use this technique. I would use maybe the defense number one technique, the step four sidestep.

Matter of fact, instructor Andrew’s going to actually show it to me. He’s going to come in, one, and bang, and I lose my balance because he has such long legs, my leg won’t reach him. So one more time, he’s going to show the demonstration again. This way.