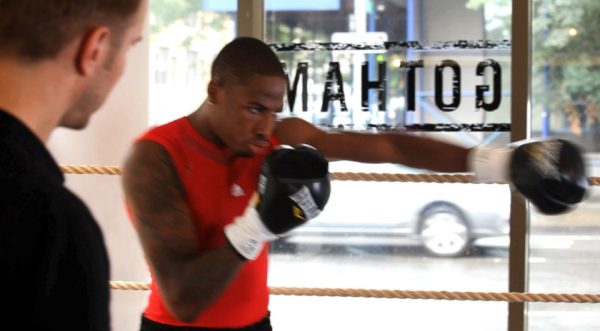 My favorite shadow boxing drill was taught to me by the one and only Delen Parsley, Sr., DD’s dad. It’s called corner to corner. It’s a very basic way of shadow boxing in a linear fashion. In this case we’re in a ring, so we’ll go from one corner to the other corner. And we’ll go a round robin in the ring. It can also be done on a linear line at your house. Corner to corner builds your basics, and we’re going to show you how it’s done.

In his quarter turns he might even want to, spin again. Keep that foot right there. Spin again. He might even want to throw a shot. Throw two shots right there. Quarter turn again. Throw another two shots. Quarter turn. Another two shots. Throw one two three four forward. Step to the right. Right hand left hook. Step to the left. Liver shot. Left hook to the head. Do that again. Liver shot. To the head. Good. Roll right. Right hand left hook. Four straightforward.

So, where we’re going with this here is he can go back and forth, move in properly with his footwork, punching with good, crisp technique. He’s able to go from one corner to the other corner, back around, and it gives a trainer a good, fresh pair of eyes to look at his fighter and say, my fighter’s looking sharp, it’s time to move to traditional shadow boxing.