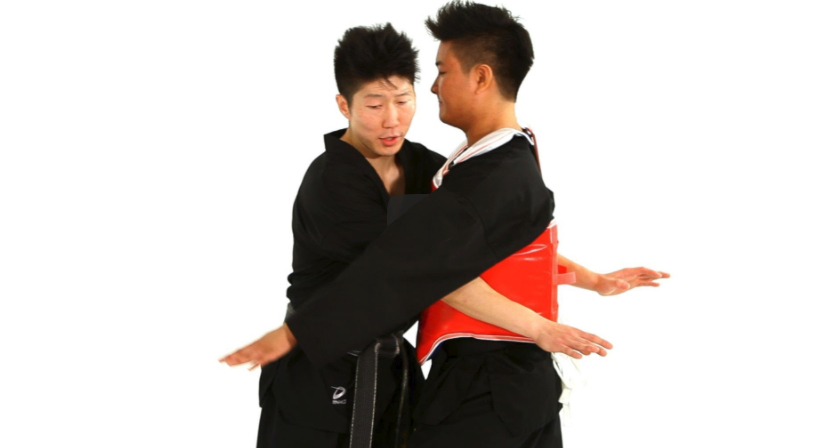 I’m going to be showing you guys another clinch technique against an aggressive opponent. Now, again, just like before, I’m going to maybe kick and clench. So, I’m going to go one, bang, and go for the clinch, but this time my opponent doesn’t slide back, but he wants to push me forward. So, he’s pushing me hard. Boom. Boom. Oh, and one thing about this, is if you push me far enough, I’ll be out of the ring which I get a penalty for.

Second is he could be overly aggressive and pull his hand out and throw a kick. Bang. Like that. So, again, if you are weak against an overly aggressive opponent, that’s going to happen to you. You’re going to lose points. So what I like to do is I like to transfer the energy. Okay? I go for the clinch. If you notice my hands, my hands again now holding. That’s a penalty. You want to have your hands out. Now, when my opponent starts pushing this way, I can feel it. So what I’m going to do is look at this little, slight detail in my arm. I’m going to slightly clinch, like, this way. Kind of control his back a little bit and while he’s pushing forward, I’m going to use the side-step technique number three which looks like this. He goes in hard. I turn out this way. Now, again, look at my hand. I’m not grabbing the chest protector. I’m doing this, controlling his back, and go for the roundhouse kick. So, one more time, really slow again. I go in for the initial attack. Boom. Go for the clinch. He presses hard. I spin him around. Bang. This way. So, one more time. Attack. One. Comes in. This way. And that’s how we do the clinching technique number two in sparring.