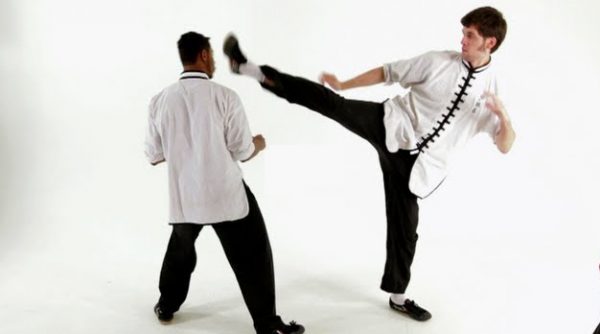 We’ll start from the very basic kicks all the way to a little bit more advanced.

To begin with, we’ll start with the sidekick. From this ready position, he’s going to step in with the rear foot, lift the front knee, and extend his leg out, striking with the bottom of his foot. A little faster. This is a very effective kick for self-defense. This kick can be placed at the knee, as well as the hip, or even the head.

The next kick we’re going to demonstrate is the roundhouse kick. It’s a very common kick. You see it in a lot of different styles. As he steps in, he’s going to lift his knee, point his toe this time, and extend the leg towards the head. One more time, slowly. Step in, lift the knee and point the toe, extend and strike the head, making sure that he recoils after the kick.

Our next kick will be the hook kick. In this kick, he’s going to extend his leg out, just like he did in the sidekick, and then hook or loop the kick towards his back. And slowly kick. And again. And now full speed.

Our next kick will be the variation of that. It will be this spinning hook kick. It’s a little bit more advanced. And in this scenario, he’s going to actually take a step as he goes into his spin and then execute a hook kick right from there. It’s a very powerful kick.

The next kick he’ll demonstrate is a crescent kick. This kick will come up towards the center and then out. Now striking with the bottom outside portion of his foot. Notice that the leg is straight. One more time.

And the last kick we’ll demonstrate is a very effective kick. It can be used either to strike the leg and break the knee, or even used to stop a kick. It’s called in Cantonese. So he’s going to do a cross-over knee kick, striking with the heel.